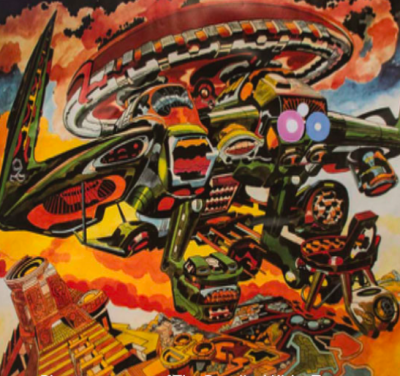 Black and White and Read All Over

The popular appeal of comic book art is the focus of Black and White and Read All Over, a new exhibit opening May 18 at the Museum of Ventura County. The Museum will host an opening reception, 6 to 8 p.m. in the Huntsinger Gallery, 100 E Main Street, Ventura.

Comprised of work by local and regional artists who shaped the development of the American comic strip and comic book during the past century, the exhibition provides understanding and insight into the medium of comics as an art form.

Artists whose work will be on exhibit include:

Jack Kirby, a former resident of Thousand Oaks, is widely regarded as one of the comic book industry’s major innovators and most prolific creators. Kirby is best known for his work on Marvel’s Captain America and Silver Surfer.

Patrick McHale, a former resident of Ojai, is an Emmy Award winning writer, artist, animator and filmmaker. His mini-series Over the Garden Wall won an Emmy for best animated mini-series. A series of comic books was produced in 2015 based on the animated production.

Sergio Aragones, a cartoonist for MAD Magazine and resident of Ojai, is known as the creator of his comic book, Groo the Wanderer.

The Hernandez Brothers, who were born and raised in Oxnard, hit the alternative comic book scene in 1981 with their black and white comic, Love and Rockets.

Admission to the opening reception is free for members; $5 for nonmembers. A no-host bar will be available. The exhibit will run May 18 through August 12. For more information, visit venturamuseum.org or call 805-653-0323.