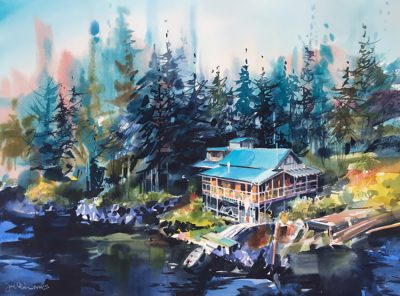 Joe Cibere and Margy Gates will display their art in “H2O Watercolors” at Fox Fine Jewelry from March 16 – May 14, 2017, with an Art Reception on March 18 from 6 – 8:00pm. Musician Corinn Conant will sing and play guitar during the reception.

Joe Cibere has been a commercial artist for forty years. He has worked as a designer, illustrator, photographer and creative director for many top U.S. brands. Thirty years ago he worked with copywriter Kerby Lecka. After working for different firms, they reunited to start their current company in 1999, Westlake Marketing Works.

In 1972 Cibere selected Thousand Oaks to raise his young family and moved from the east coast. He found a job in Westwood and commuted for the next nineteen years! When he opened his company he was still living in the same house, and he chose a very close business location.

Cibere continues to study (Anita Engle served as a mentor) and has taught locally for many years. Currently he teaches at his SCIART studio. His demonstrations take an hour at most and often become finished paintings. Says Cibere about painting in a minimalist style, “The challenge is to know when to stop. It’s like golf. Less strokes give a better result.”

It took Cibere twenty years to be accepted into the National Watercolor Society, but he’s now a signature member and on the Board of Directors. His work has been published in “Watercolor Magazine” and in “The Watercolor Sky and Cloud Techniques of 23 International Artists.”

A native Californian, Margy Gates holds a Master of Fine Arts degree from Claremont Graduate University. But Gates true love is the ocean. She’s not only a painter, she’s also a sailor and she snorkels and beachcombs.

Gates has travelled and painted extensively internationally. As a part owner of a remote Fiji plantation, she often painted the underwater reef scenes and lush landscapes.

About working en-plein air, Gates says there are “annoyances and challenges of the wind and changing light. . . I attempt to paint the image so that even though it is caught on paper, it has the sense of continuing to move, to change.”