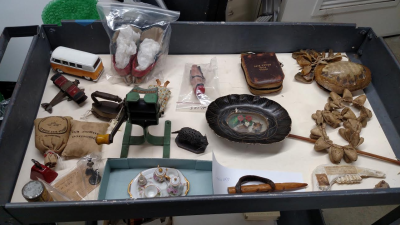 The Museum of Ventura County presents “Ventura @ 150: Celebrating the City of Good Fortune,” a commemorative exhibition that celebrates the city’s sesquicentennial.

Large-scale portraits of early Ventura residents from every sector of the community transport visitors to San Buenaventura’s early days, when the character and direction of the city was being formed. Six-foot high panels with descriptive captions tell the story of men and women who migrated here or were born here and enhanced the community, such as:

Carlos Luis “Charley” Hall – Born in Ventura in 1904 and baptized at Mission San Buenaventura, Charley Hall learned to play baseball with the Ventura Juniors team. He entered the professional ranks at the age of 21 with the Cincinnati Reds, ultimately pitching in two World’s Series games as a member of the Boston Red Sox.

Minnie Soo Hoo Bock – Born in Santa Barbara in 1878 to merchants Yee Sing and Chin Shee, Minnie got her name from missionaries who taught her to read, write and speak English. In 1895, Minnie married a merchant named Soo Hoo Bock and they made their home in San Buenaventura’s’ Chinatown. The letters that Minnie wrote to her sister in Los Angeles are among the earliest historical records of the Chinese-American experience in California.

LeRoy Gibson, Sr. – Born in 1909 in Wewoka, Oklahoma, LeRoy Gibson became a professional boxer, traveling throughout the country under the nicknames “Wichita Wildcat” in Kansas, and the “Bon Bon Kid” in Boston. Around 1935, Gibson came to Ventura for an exhibition fight at the Ventura Athletic Club, remaining a resident until he passed away in January 1996. Gibson served honorably in the Navy Reserves and opened a successful restaurant on South Figueroa Street called Gibson’s Old Fashion Bar-B-Que Pit.

Theodosia Burr Shepherd – Shepherd was known as “the Flower Wizard of California.” Her husband William E. Shepherd, an attorney, moved his new bride to the Central Coast from Iowa in 1873. He later was publisher of the Ventura Signal. Shepherd was instrumental in developing the floral horticulture industry in California; her gardens at Chestnut and Poli became a famous tourist attraction in the late 1890s. E.P. Foster bought this lot in 1920 and donated it to the city for a new library. Portions of the garden can still be seen on those grounds.

For fun, the Museum’s curators have created a special section, called “Dr. Bard’s Cabinet of Curiosities” that shows artifacts collected over the years by the not-so-well known residents and donors to the Museum of Ventura County, such as:

A large photographic of the city of Ventura from the hills, made from glass plate negatives dating back to 1880, shows visitors how the city developed along Main St. Visitors will be able to leave a sticky note where they or their family lived, filling up the map with generations of residents’ “marks.”

This exhibition was sponsored in part by a gift from Regent Properties.