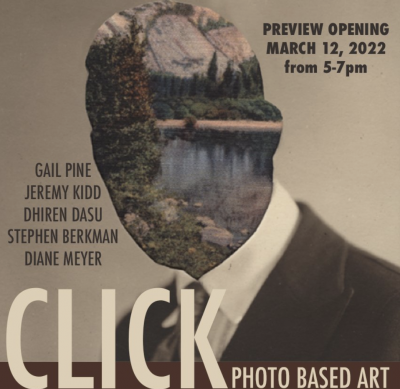 No longer is photography considered the art world’s creative stepchild; subtly over the years it has worked its way into the mainstream of what we consider to be legitimate. Like a cuckoo’s egg that has long hatched and now rises proud amongst its peers, it more resembles another opportunity for creativity, another tool at our disposal to further our personal expression.

None of the artists in ‘CLICK’ seem fully satisfied with images that come directly to us through the lens. It is as if they feel the need to intervene, to show us how much better or interesting reality could be if only we would step into their world. Whether the artist divides grand architectural images, and reuses the pieces seamlessly to build new buildings, or they embroider into photographs to bring a calming seemingly grandmothers' wisdom to an otherwise historically harsh Berlin cityscape, these artists manipulate the ordinary to suggest a better outcome. Joining in to their imaginings we see the world in a better place from how we found it.

Two of the five Southern Californian artists exhibiting even meddle with our vision of different centuries, either by way of visually reliving what could have happened, and presenting us with new photographic evidence, or finely sculpting old portrait pictures and recombining them to revive them with a new lease of life.

Another creates an intermediate art form between stills and movies, but rather than what we might imagine as being a blurred or jittery product, we see a highly moderated and carefully unfolding and meditative (hallucinogenic without the hangover?) scene of both natural and urban worlds.

Image Shown: Gail Pine-Headlands Series-I was able to start over-2021